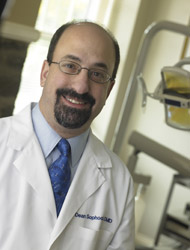 Member of the American Dental Association

Dr. Sophocles was born and raised in Wallingford, Pennsylvania, where he was educated in the Wallingford-Swarthmore school district. He graduated from Trinity College in Hartford, Connecticut in 1983 with a degree in Biochemistry.

Dr. Sophocles returned to the Philadelphia area to continue his education at the University of Pennsylvania School of Dental Medicine . Since graduating in 1987, he has studied regularly on a postgraduate level in the areas of implant dentistry, periodontics, prosthodontics, and cosmetic dentistry, with a special interest in porcelain and composite restorations. An active Penn Dental alumnus, Dr. Sophocles has served both as a member at large on the Executive Board of the Alumni Society (2005-2012), as well as a Clinical Assistant Professor in the Department of Preventative and Restorative Sciences (2006- 2014).

Outside the office Dr. Sophocles is also an accomplished jazz pianist and has performed and recorded widely since 1980. A list of his upcoming performances can be found on his personal Web site .

Dr. Sophocles is married with two children and resides in Swarthmore, Pennsylvania.

Find us on the map